All About Non-Stick Coatings - Types and Their Contents

All About Non-Stick Coatings – Types and Their Contents:

The advent of the non-stick coating wasn't something intentional in fact, it was merely a coincidence, but now it has become so integrated with our daily lives that we can't even live a life without it. How is it a coincidence? Actually, in the year 1938, a chemist named Roy Plunkett was conducting an experiment which was directed to find out any alternative to freon, which is a refrigerant for the company named DuPont chemical. That experiment was intended to find something else, but in one of its processes, when they froze and compressed tetrafluoroethylene, they obtained a white waxy solid stuff which was found to be very slippery. Cut to 20 years later, the company trademarked this white waxy solid as Teflon, and it became the core component of the non-stick coating. However, the majority of us are only aware of one type of non-stick coating that is PTFE, but there are six more which aren't used as commonly as PTFE but are equally significant to mention and talk about. Having said that, let's have a look at all the different types of non-stick coatings that exist and how they are different from one another.

There isn't much to talk about PTFE coatings because most of you are already familiar with this type of non-stick coating as it is the oldest of them all. However, one important thing to note here is that PTFE coatings or Teflon coatings as we know them today aren't just made of PTFE, but along with that, there is another component that is perfluorooctanoic acid or PFOA. However, this non-stick coating is found to be hazardous, not slightly but highly hazardous; it impacts the kidneys and causes severe kidney diseases. It also damages the male reproductive system and is even said to cause cancer. Therefore, due to these reasons, PTFE coatings have become very unpopular. However, if you still have any cookware item at home that is PTFE coated, then it is suggested to use it for only low heat tasks and avoid scratching the surface.

Ceramic coatings became common in the 1960s and were found to be a great alternative to PTFE coatings. A mixture makes these coatings of clay and silica in which we add binders, oxygen, and some reinforcing chemicals to make them hard, and then finally, we add color to it; before this method of making ceramic coatings, there was another method that involved the use of lead and cadmium, but both of these materials were later found to be toxic as a result the silica and clay came to be and soon became popular. However, ceramic coatings are free from PTFE or any other toxic chemical. Ensure that your kitchenware ceramic coatings supplier gives you PTFE-free and chemical-free ceramic coatings. Otherwise, there is an excellent possibility that those chemicals will leach onto your food, and no one wants that. Although ceramic coatings are durable, every ceramic coatings manufacturer suggests avoiding overheating your ceramic-coated cookware to increase its life. Other than that, the benefits of this coating are endless; it is the healthiest non-stick coating among all seven of these.

The superhydrophobic coating isn't very common in present. Still, it will become in the future, especially in cookware, as it has the ability to repel against water so nicely that it can slide off the water in less than a second. Currently, superhydrophobic coatings are being used on windscreens and have proven to be highly adequate. It is made up of materials like zinc oxide, polystyrene, precipitated calcium carbonate, carbon nano-tube substances, and manganese oxide polystyrene.

We are already familiar with a handful of baking and cooking utensils that are made up of silicone rubber, and they have been very convenient to use. This silicone rubber is made of silica mixed with methyl chloride and water to form polydimethylsiloxane. It is then heated up to 1800˚C, and then we add water to it again to get the final product, silicone rubber. This silicone rubber has been used as non-stick coatings on cookware and bakeware and is regarded safe by FDA. However, it is still non considered a complete non-stick coating; therefore, the cookware or bakeware must still be greased and oiled properly to prevent the food from sticking to it.

An anodized aluminum coating is manufactured by mixing aluminum with an acid to form aluminum oxide, then applied to the cookware to make it non-stick. It is a safe, non-toxic, heat-resistant, non-stick coating, but its only disadvantage is that it is considered to be a cause of Alzheimer's. However, it is still commonly used to coat cookware; if you have one, then you must use wooden or silicone utensils with it so that the surface of the cookware isn't scratched anyhow. In that case, aluminum will get mixed with your food and can cause chronic illnesses. 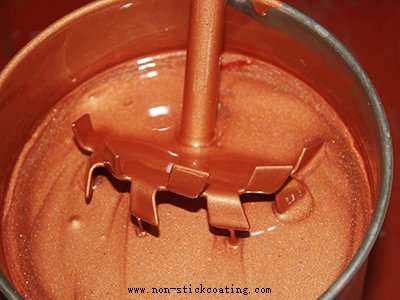